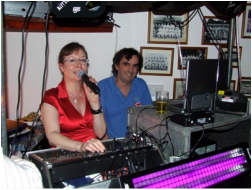 Scorpio Mobile disco was established in Buxton during September 1994 by Kathy, who started Djing in the late 80s as half of another mobile disco and then moved on to clubs during the early 90s.

Simon started helping at the age of 15 as a roadie during 1999, but soon became much more than a roadie and can easily do the show by himself.  Howard pictured left with Kathy, fills in occasionally when Simon is on holiday.  (Photo taken in Glossop at Simmondly Cricket club, in 2006, the function was a 21st Birthday party. We use totally different, modern equipment now, but like this old pic.)


Take a look at the Gallery to see picutres of us all.  The photo's are of the current 2 set ups.  You can also view video's, one is of the smaller disco and the others are of the larger one.  (Simon appears on most of them)  If you have any photo's of your own from any of our parties, that you would like to see on the website, please e-mail them over to scorpiodisco@hotmail.co.uk

We have met wonderful people over the years and it has always been a pleasure to see people having a great time, thats why we hold our own Public Liaibility Insurance, with a coverage of £10,000,000, to give you piece of mind.
Click here to confirm this DJ has valid Liability Insurance 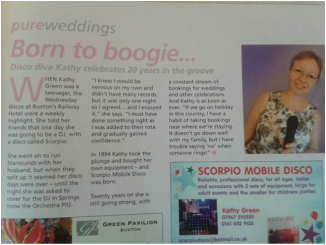 As I have celebrated 20 years of Scorpio.  Pure Buxton have
written a little about me in their autumn, magazine.